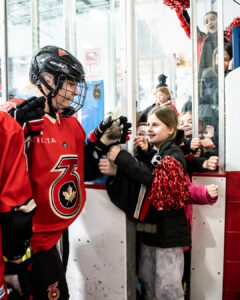 On January 22, at Canlan Sports – York, the Toronto Six (women’s pro hockey team) fell to the Connecticut Whale by a final score of 7-4 in the second of four meetings on the 2022-23 PHF calendar.

“We didn’t show up. I think a lot of time, we think we just have to show up, but we need to play every day,” said Geraldine Heaney, Head Coach of the Toronto Six. “They took the night off, and I do believe it was going to happen at some point. We usually pull those games through, and today we didn’t, but hopefully we learn from it.”

Duplicating their early start from Saturday’s season-series opener, Connecticut’s Alyssa Wohlfeiler broke the ice five minutes into the opening period, tallying her fourth goal of the season to put the visitors up early.

Representing the game’s only goal through the first twenty minutes of play, the Whale didn’t waste much time in the second to build on the early lead, as forward Caitrin Lonergan connected with reigning MVP Kennedy Marchment who beat Six backstop Elaine Chuli to double the score with her thirteenth goal of the season.

Continuing to keep the Six at a distance throughout the game’s middle frame, Whale captain Shannon Turner found the stick of Lonergan just over three minutes later, who beat Chuli on the power play to put Connecticut up 3-0 with her fourth goal of the season.

Riding high with a three-goal lead amidst a dominant second period, Marchment continued to put her foot on the gas pedal in the early goings of the third frame, beating Chuli shorthanded with her league-tying fourteenth goal of the season to extend her team’s lead over the second-place Six.

Struggling to gather momentum offensively despite a number of scoring chances, Toronto’s Brittany Howard snapped Connecticut’s shutout bid in the preceding seven minutes, going forehand to backhand on Abbie Ives to get the hometown Six on the scoresheet with her league-leading fifteenth goal of the season.

“Scoring obviously gets tight come playoffs and leading into playoffs, and we want to continue to be productive on the offensive side,” Howard said after the game. “We want to get more pucks on net, and we want to score more goals, and obviously that will help.”

While netting a critical goal to keep her team in the game, it wasn’t enough for Toronto to run, as they dropped a 4-1 decision in regulation to split the first half of the season series.

“It just didn’t go our way today. Bounces weren’t going our way and we didn’t show up like we did yesterday,” said Brooke Boquist after the game. “We have a few things to work on, and we’re going to get back to working hard this week in practice.”

“I think we had a tough first period weekend,” said Michela Cava after the game. “We definitely didn’t get off to the right start, but maybe we have to work out a few kinks. At the end of the day, it’s good to happen now, and we’ll figure it out for the rest of the season.”

Making her ninth start of the regular season in the series rubber match, Chuli made  saves between the pipes in the losing effort.

“In a game like this, she got peppered with shots and she made brilliant saves. You can’t write all the saves up on paper, but she’s the backbone of our team,” said Taylor Woods of her team’s starting backstop. “She’s always there and it’s just rallying around her and she can bring the momentum to us. She’s always stellar and she’s always going to continue to do that throughout the season. ”The Toronto Six look to get back in the win column on Saturday, February 4 when they return home to Canlan Sports – York for a weekend homestand against the Buffalo Beauts. Both games will be available for viewing on ESPN+ in the United States, and on TSN Direct for viewers tuning in across Canada.

About The Toronto Six

The Toronto Six (The 6ix) is a professional women’s hockey team.  As girls and Women’s Hockey registration in Canada continues to grow, The 6ix are on a mission to drive change for women (players, fans, and sponsors) by offering an elevated experience on the ice, in the locker room, and throughout our communities. The 6ix aims to be the gold standard in women’s hockey, and to create the model for a sustainable sports organization that also serves as a platform for gender equity in sports and beyond. The 6ix aim to do this by EDUCATING about a new way to look at, consume and support women’s professional sports, EMPOWERING women to take risks, skate outside the lines, and build meaningful confidence in sports and beyond, and INCLUDING people of diverse backgrounds and opinions.